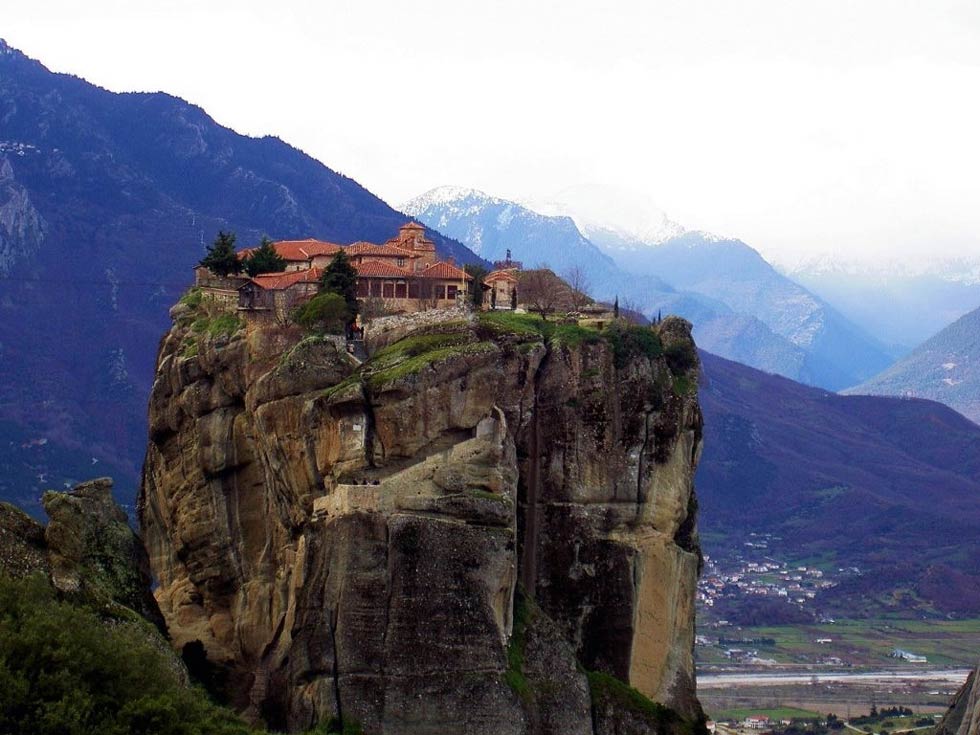 The Metéora (Greek: Μετέωρα, pronounced [mɛˈtɛoɾɐ], lit. "middle of the sky", "suspended in the air" or "in the heavens above" — etymologically related to "Meteorite") is one of the largest and most important complexes of Eastern Orthodox monasteries in Greece, second only to Mount Athos. The six monasteries are built on natural sandstone rock pillars, at the northwestern edge of the Plain of Thessaly near the Pineios river and Pindus Mountains, in central Greece.

The nearest town is Kalambaka. The Metéora is included on the UNESCO World Heritage List under criteria I, II, IV, V and VII.

The Theopetra caves 5 kilometres (3.1 mi) south of Meteora had inhabitants fifty millennia ago. The oldest known example of a man-made structure was found within a prehistoric cave in central Greece, according to the Greek culture ministry. The structure is a stone wall that blocked two-thirds of the entrance to the Theopetra cave near Kalambaka on the north edge of the Thessalian plain. It was constructed 23,000 years ago, probably as a barrier to cold winds. "An optical dating test, known as Optically Stimulated Luminescence, was applied on quartz grains nested within the stones. We dated four different samples from the sediment and soil materials, and all provided identical dates," Nikolaos Zacharias, director of the laboratory of archaeometry at the University of Peloponnese, told Discovery News. According to a statement by the ministry of culture, "the dating matches the coldest period of the most recent ice age, indicating that the cavern's inhabitants built the stone wall to protect themselves from the cold." Excavated since 1987, the Theopetra cave is well known to palaeontologists as it was used and inhabited continuously from the Palaeolithic period onwards (50,000 to 5,000 years ago).

More info for Meteora and Monastaries at Wikipedia.