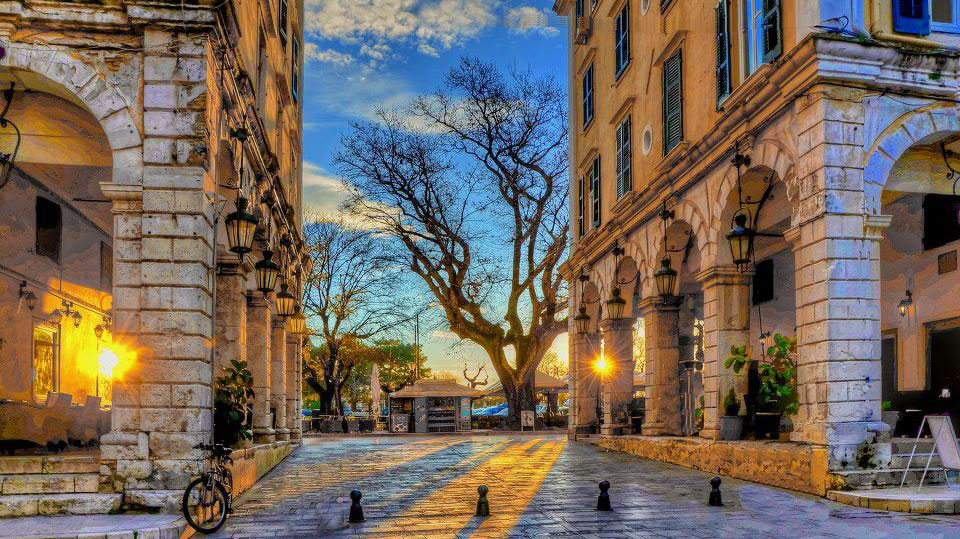 Corfu (Greek: Κέρκυρα, Kérkyra, [ˈcercira]; Ancient Greek: Κέρκυρα or Κόρκυρα; Latin: Corcyra; Italian: Corfù) is a Greek island in the Ionian Sea. It is the second largest of the Ionian Islands, and, including its small satellite islands, forms the edge of the northwestern frontier of Greece. The island is part of the Corfu regional unit, and is administered as a single municipality. The municipality includes the island Corfu and the smaller islands Ereikoussa, Mathraki and Othonoi.

The principal city of the island and seat of the municipality (pop. 32,095) is also named Corfu. Corfu is home to the Ionian University.
The island is bound with the history of Greece from the beginning of Greek mythology. Its Greek name, Kerkyra or Korkyra, is related to two powerful water symbols: Poseidon, god of the sea, and Asopos, an important Greek mainland river. According to myth, Poseidon fell in love with the beautiful nymph Korkyra, daughter of Asopus and river nymph Metope, and abducted her. Poseidon brought Korkyra to the hitherto unnamed island and, in marital bliss, offered her name to the place: Korkyra, which gradually evolved to Kerkyra (Doric). Together, they had a child they called Phaiax, after whom the inhabitants of the island were named: Phaiakes. This term was transliterated via Latin to Phaeacians. Corfu's nickname is The island of the Phaeacians.
The island's history is laden with battles and conquests. The legacy of these struggles is visible in the form of castles punctuating strategic locations across the island. Two of these castles enclose its capital, which is the only city in Greece to be surrounded in such a way. As a result, Corfu's capital has been officially declared a Kastropolis ("castle city") by the Greek government. From medieval times and into the 17th century, the island was recognised as a bulwark of the European States against the Ottoman Empire and became one of the most fortified places in Europe. The fortifications of the island were used by the Venetians to defend against Ottoman intrusion into the Adriatic. Corfu repulsed several Turkish sieges, before falling under British rule following the Napoleonic Wars. Corfu was eventually ceded by the British Empire along with the remaining islands of the United States of the Ionian Islands, and unification with modern Greece was concluded in 1864 under the Treaty of London.
In 2007, the city's old city was designated for the UNESCO World Heritage List, following a recommendation by ICOMOS.
Corfu is a very popular tourist destination. The island was the location of the 1994 European Union summit.

The city of Corfu stands on the broad part of a peninsula, whose termination in the Venetian citadel (Greek: Παλαιό Φρούριο) is cut off from it by an artificial fosse formed in a natural gully, with a seawater moat at the bottom, that now serves as a marina and is called the Contrafossa. The old town, having grown within fortifications, where every metre of ground was precious, is a labyrinth of narrow streets paved with cobblestones, sometimes tortuous but colourful and clean. These streets are known as kantoúnia (Greek: καντούνια), and the older amongst them sometimes follow the gentle irregularities of the ground; while many are too narrow for vehicular traffic. A promenade rises by the seashore towards the bay of Garitsa (Γαρίτσα), together with an esplanade between the city and the citadel known as Spianada with the Liston (it) arcade (Greek: Λιστόν) to its west side, where restaurants and bistros abound.