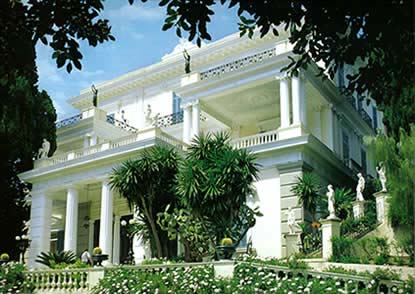 First stop is Achilleion Palace, built by the Empress Elisabeth “Sissy” of Austria in 1891, and later owned by Kaiser Wilhelm II of Germany. You will visit the museum, as well as its beautiful gardens with spectacular views. The palace was designed with the mythical hero Achilles as its central theme. Corfu was Elizabeth's favourite vacation place and she built the palace because she admired Greece and its language and culture.

From Achillion palace we continue to Kanoni. From Kanoni you can admire the famous view of Mouse Island (‘Pontikonisi’). According to the legend Mouse Island was formed when the ship that had taken Odysseus back to Ithaca, his home port, was turned to stone by Poseidon. Under the Hill of Kanoni is the Convent of Vlachernas, place that is maybe the most photographed spot in Corfu

From Kanoni we continue to Mon Repos.The Mon Repos Palace is located in the suburbs of Corfu Town. The mansion was built in 1828 by the British Commissioner of the Ionian Islands, Sir and was a gift to his Corfiot wife, Mrs Palatianou. Today this mansion is a museum full of archaeological findings from the local excavations and offers a view in palace life in the 19th century and the British colonial era.

From Mon Repos we continue to Corfu Town.Corfu Town is a major tourist attraction, and has played an important role since the 8th century. The old town of the city was inscribed on the UNESCO World Heritage List. The old fortifications of the town, formerly so extensive as to require a force of from 10,000 to 20,000 troops to man them. There is promenade by the seashore towards the bay of Garitsa, ) and also a handsome esplanade between the town and the citadel called Liston. Corfu town today is a vivid tapestry of cultures—a sophisticated weave, where charm, history, and natural beauty blend. Stroll down narrow cobbled streets and admire the Venetian influence in the architecture, as the town's history comes to life.